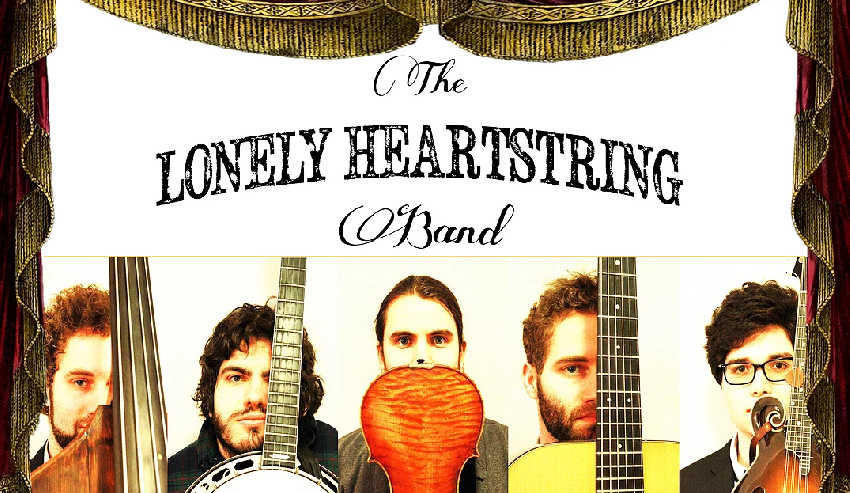 SOLD OUT  – NO DOOR SALES

This is top notch bluegrass, honed to a razor sharp edge on the road all over the USA. But that’s not all. Heavens above, they’ve even been hitting Germany, the hotbed of bluegrass, on their way to New Zealand. Their Auckland Folk Festival appearance is sure to be a great set, but at the Auckland Bluegrass Club it will be a totally different experience. This is no concert where their shoes level with your eyes.  Seeing them at the Bunker is very much like having friends over to your house for an evening, except these friends can really, really pick. Reserve your tickets at Under the Radar now because this is a small venue – that’s what makes it unique and enchanting. Doors open at 7:15 for 8pm start for a full, two set concert. Ensure you get a seat – Reserve tickets now Check these tracks out: “This fast-rising young quintet is the most notable bluegrass band to come out of Berklee well, maybe ever.” – George Varga, San Diego Union Tribune. The Lonely Heartstring Band Wednesday, 7 February 2018 8 pm  The Bunker, Mt Victoria, Devonport Tickets: $25 + $2 Booking fee  www.UndertheRadar.co.nz 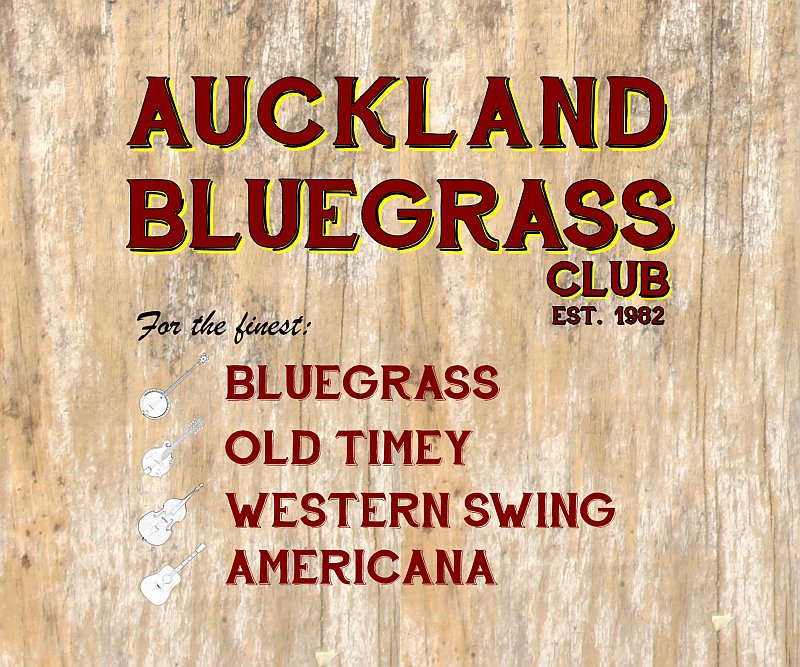 Roll up folks! Come and be seen on the suddenly fashionable bluegrass scene. Be the envy of your friends. Sneak past the paparazzi and take selfies with Auckland’s b-list* celebrities and watch them go viral.

Once you make it inside, be outrageously daring and take the floor to perform a couple of songs in the first half, before you lap up a Christmas supper and cap the evening off with a leisurely bluegrassy-but-not-too-fast jam in the second half.

Or, if performing is not your thing, just come along and soak up the musical atmosphere.

Either way, it will be a fun night not to be missed.

Auckland Bluegrass Christmas club night
Wednesday, 13 December 2017  8 pm
The Bunker, Mt Victoria, Devonport
Members $5 non-members $8 at the door
*  Bluegrass list
** If you’re wondering what happened to Wires and Wood for December they have been deferred due to circumstances beyond their control.

Dig through the closet, search under the bed. Find that bluegrass instruction manual, the one you haven’t seen for years.

When you find it, turn to the chapter called Giving It A Go.  That’s the chapter about getting off your chuff and coming along to your local Bluegrass Club and singin’, playin’ and jammin’.

Because this Wednesday 11 October is your big opportunity to get up and perform at the friendly Auckland Bluegrass club night.

Get yourself along, put your name down with the bluegrassy looking president Al Young, and don’t be shy about asking other musicians to help you out.

Go it alone, or create an instant band, either way get into some bluegrass.

Of course you might be the quiet type who’d rather not actually stand up and perform. Luckily, there is room for you too, in our jam session – your chance to jam along like an introvert or like an extrovert, according to your fancy.  The songs can be found here.

If you can’t handle performing, and you honestly don’t feel like jamming, well you won’t need that Bluegrass instruction manual, just come along and enjoy the fun.

Bluegrass and Beyond 8 November 2017

Let’s hit the highway and head down to that dusty town called Bluegrass.

Leading the trip will be the talented vocalist and guitarist John Olding, while lightning-fingers Colin Spier will add excitement with his bluegrass banjo and flat-picking guitar.

They won’t be the only one in the truck. Cameron Bennett and Steve Gerrish will be filling the gas tank with high octane dobro, vocals, and mandolin, while Pete Parnham spins the driveshaft with his solid bass.

There’ll be smiling faces and a lot of foot tapping on this trip, so for goodness sake don’t miss it.

If you want to perform in the first half, get there early and talk to el presidente/MC, the one and only Al Young.

It’s been a while, but they’re back down from the hills and all fired-up to play on the mountain again.

Guest band at this month’s Auckland Bluegrass Club meeting on September 13 is Clench Mountain Revival, with a great mix of bluegrass and old-timey. The band’s members are all club members – Beverley Young is the main singer and plays guitar, Bryan Christianson plays banjo and sings, Garry Trotman plays bass and sings, and Al Young plays guitar, dobro and autoharp and sings a little bit.

It’ll be a great night, and if you don’t come you’ll be really disappointed later when you hear how good it was.

Avoid disappointment. Be at the Bunker on Mt Victoria at Wednesday, 13 September 2017 8pm.

But wait, there’s more! The first half will feature more fine music from other club performers. If you want to be one of them, get there before 8pm and talk to the compere, Al Young.

There’ll be no mooning out the back window of the bus on this interclub excursion. We are far too grown up for that, and besides, we’ll be car pooling.

We – the Auckland Bluegrass Club – are heading down to have some fun with Back Porch Bluegrass, the group who keep bluegrass alive and kicking in the Waikato, thanks to Mr Bluegrass himself, Paul Trenwith.

It will be a fun afternoon and too good to miss. This is what the music is all about – gathering, picking and making new friends.

If you haven’t driven down that way lately, the roads have gotten better, it’s a four lane black-top almost all the way, and is only 82 miles from downtown Auckland. It’ll take the Chevy about 1 3/4 hours and 25 gallons of gas.

So get your bluegrass friends and head on down. Blow the dust of those old bluegrass hits and have some fun on our 9 August club night. You can choose to simply hum along and watch the fun, or go for that special rush that only comes from getting up and performing.   There’ll be lots of people there to help you out musically if you like.

What’s more, if you come to this special club night you’ll get into the Auckland Bluegrass Club AGM absolutely free!

This will be the only all-in-one package deal like this for 2017 so don’t miss out.

At the Auckland Bluegrass Club we don’t stand on ceremony so the bonus AGM will only take a few minutes of bonhomie and banter. You’ll hear from Gary how much we dosh we have stacked away in the Cayman Islands, and you can have a lot of fun nominating your friends for the committee. 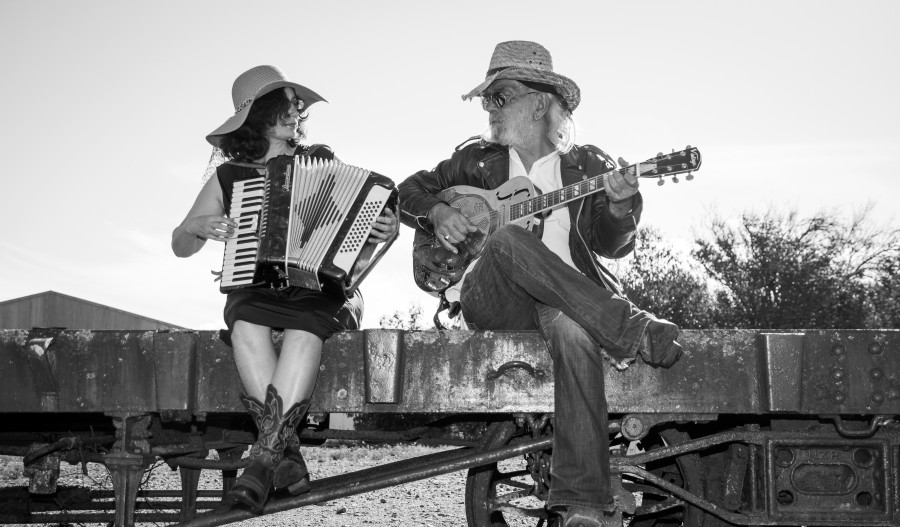 It will be a rare treat to hear Bob Cooper-Grundy partner with Kate Marshall for a guest spot at the Auckland Bluegrass Club in July.

Bob Cooper-Grundy is one of those guys who, over the past 40 years, has begun to look more and more like the songs he sings. He seems to accumulate authenticity in the same way that wear and tear somehow makes old guitars sound better.

Kate Marshall is the perfect foil for Bob’s musical persona, bringing fiddle, accordion, flute, and a certain tenderness to the partnership.

“She sings quite beautifully,” he confesses.

Bob and Kate usually play their Americana mix around the southern North Island from their Wairarapa home, but this time they are coming up to us.

Stand aside boys, when these girls mobilise you know it’s gonna be good. Coming in from all over the North Island, they are going to serve up a great set of their infectious, all-girl bluegrass.

You will be entertained with snappy bluegrass originals by Heather Carrigan and Deborah MacKenzie, together with some of your bluegrass favourites. It will all be delivered with polished harmonies, while they are kitted out in nothing but the finest 40s and 50s vintage styles.

Their cheerful delivery will be completed by the charismatic Jenine Abarbanel on bass, Krissy Jackson’s dazzling fiddle, and Sue Drake doing that banjo thing with five strings and only three fingers.

This show will be too good to miss.