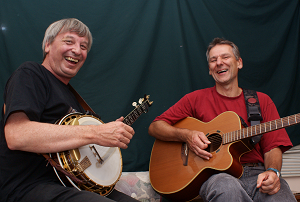 Kick off? Kick up? Whatever, it’ll be the same thing Auckland Bluegrass and Traditional Old Time Country Music Club, this Wednesday 8 February at the bunker.

You can be part of the first club night of the year – that great tradition where we get together and play and listen (some even do both at the same time!). Last year the club nights threw up some great moments, when you couldn’t help but think that ordinary folks like us can make just as good music as the famous guys.

If you’d like to perform give your name to Al Young when you arrive. It’s easier than you might think and there are a bunch of bluegrassers and old country musicians just waiting to help you if you want to flesh your sound and make it all bluegrassey.

To finish up we will have a jam around three standards: Nine Pound Hammer, Blue Night, These Memories. (Chords and lyrics below). You can get right out front and let fly or quietly sing and play along – either way we want you to be part of this.

This year is going to be a mixture of great performers and club nights – next month we have the great Rhodeworks – watch your inbox for details.

The Auckland Bluegrass Club is held on the second Wednesday of the month at the world famous Bunker in Devonport. Directions Club nights: members $3, non-members $5 cash at the door.