Don’t be a bluegrass loner. Don’t hide under the stairs. Come and make music at the Auckland Bluegrass Club instead!

You can revel in applause by yourself, or better still, share it with some of the other players that will be there. 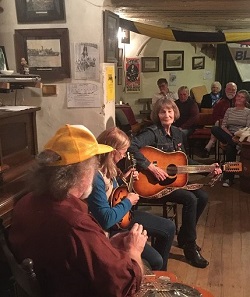 So get to work on a couple of songs now and if you can’t manage hardcore bluegrass then bring a little old time or Americana.

It’s a social music, so don’t be shy, after you’ve put your name down with AL the MC, ask around – there will be plenty of musicians there to help you sound terrific with some backing.

And if you’d rather just listen  – simply show up at 8pm Wednesday 9 November and enjoy the fun at the world famous Bunker.

To close the evening we’ll have a jam on some bluegrass classics.

Don’t forget to bring a friend and in the meantime, keep pickin’

The Auckland Bluegrass Club is held on the second Wednesday of the month at the world famous Bunker in Devonport. Directions