Playing music in a Zoom meeting doesn’t always work out because Zoom is optimised for conversation and suppresses what it thinks is background noise, sometimes including your acoustic guitar between each vocal line – or worse. The whole thing breaks up.

To override these settings and play the original unprocessed sound on a desktop go to Audio settings> advanced settings and enable the in meeting option for original sound.

When you are in the meeting look for the Turn on Original Sound option on the top left corner of the screen. Select this option before playing music and switch it back when going back to conversation. (You may need to hover your mouse over that area to make the option visible)

The process for mobile apps is similar. (These screen shots are from an Android app). First log into the app – you don’t need to join a meeting for this step. Go to Settings>meeting

You are almost done. When you next join a meeting on your mobile, before you play music, put your finger on the screen to bring up the menus and options. Select More>enable Original Sound. When you are done playing to optimise for conversation again repeat the process and select disable original sound. 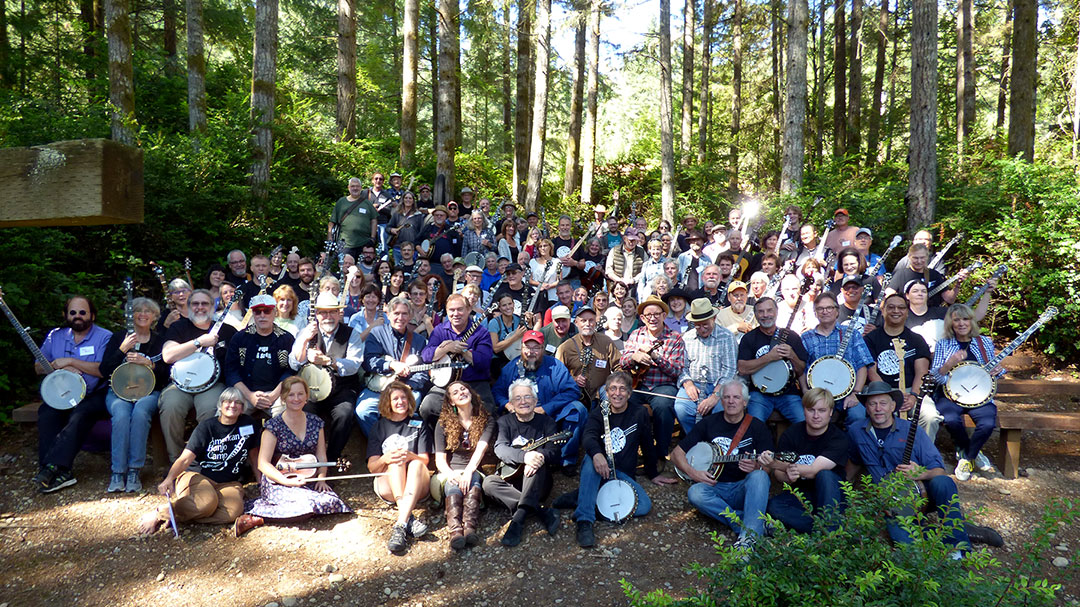 The 2016 camp, located at Pilgrim Firs Conference Centre near Port Orchard, was both inspiring and challenging. Approximately 130 people attended this year, housed in cabins or lodges – there may even have been a tent or two. Three hearty meals a day, plus snacks, made sure that none of us went hungry.

What made the camp so outstanding was the quality instruction from world famous exponents of banjo, and the fine local musicians that the organisers had persuaded to come along to support the jam sessions.

On arrival, we were greeted by the amazing Canote brothers jamming with half a dozen students near the registration table. On the first of the three nights, players could sign up for the open mike or the band scramble. For the latter, musicians were divided into groups of four by ability and style, and had 45 minutes to select a song, decide upon an arrangement and practice it. The open mike/band scramble was an opportunity to jump-start the weekend’s learning.

During the three day camp, musicians could choose from the following tracks: bluegrass banjo, old-time banjo, fiddle and guitar. Levels for the banjo classes included novice, lower intermediate, upper intermediate and advanced. There was also a guitar track and a fiddle track.

Two classes in each level were offered in the mornings, and two in the afternoons, with awesome faculty concerts on the Friday and Saturday evenings, followed by jams organised by ability level. While some of the instructors had slightly different interpretations of ability levels, it was clear to most students early in each class if they were in the wrong level. Most had a second option chosen, so were able to slip away and race off to their alternative choice. Student ability levels ranged from complete novices to semi-professional players.

If you are planning a visit to Vancouver, B.C., Portland (Oregon), or Seattle, I would recommend that you try to time it for the second week in September to take advantage of this great opportunity. And for those banjo players out there, relax – I have never heard so much tuning in my life.